You Are Here: New Professor at TTK: Robert Harlander

We are happy to announce that Robert Harlander has arrived at TTK as a new Professor in Theoretical Physics. 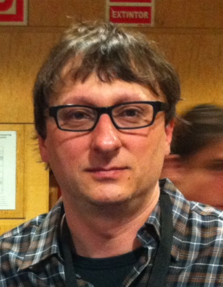 Professor Harlander is an expert in the field of elementary particle physics, in particular the physics of the Higgs boson. "This particle, which has been only discovered about 3 years ago, is fundamentally different from all the other known elementary particles. "I am especially interested what we can learn about the fundamental laws of nature by measuring the Higgs boson's properties", Harlander says. Together with his group he derives consequences of various fundamental theories which should be observable at colliders like the Large Hadron Collider.

In addition to his research, teaching and the education of young scientists is a big concern for Prof. Harlander. "It is important to convey the fascination of modern research already in the early phase of undergraduate studies. Already in the first bachelor lectures one can often find a connection to the questions which are relevant for physics today."

Professor Harlander communicates modern research also in a more general way, for example through articles in popular science media or lectures which can be understood by a broad audience.