You Are Here: Conferences and Workshops 2015

Here, you find informationen on conferences and workshops which are related to the research at TTK:

The workshop will offer a rich programme of stimulating plenary talks and parallel sessions full of intense discussion
on topics connected to the LHC, linear colliders and also Belle. The following parallel sessions will be held:

HC 2015 aims to provide a forum for both experimentalist and theorists to discuss the status of the experimental analysis and of the theoretical tools supporting them. The focus is on the current status of the Higgs boson profile and on the prospects for Run II of the LHC. In particular,

are addressed in the light of the upcoming precision phase at the LHC. Theoretical implications, ranging from model-independent analyses over specific extensions of the Standard Model to more exotic modifications, will be discussed. In addition, near- and longer-term prospects at various experimental facilities will be debated.

Participation of TTK:
Prof. Jamie Tattersall: SUSY (and BSM in general) vs The LHC
Jan Heisig: Majorana Dark Matter at the LHC and IceCube -- A Simplified Models Interpretation

The workshop will bring together the community of experimental and theoretical physicists working on top quark physics, 20 years after its first discovery, and at the beginning of the exploration of the new energy regime at the Large Hadron Collider. The workshop will provide a comprehensive overview of the latest results from the LHC and Tevatron experiments as well as the most recent theoretical developments and an outlook on top-quark physics at future colliders.

The programme will consist of plenary presentations, a Poster Session, a Young Scientists Forum and 'Question and Answers' sessions, targeted for young researchers. A significant fraction of the workshop time will be devoted to discussions.

The goal of the workshop is to provide a comprehensive picture of top-quark physics and a forum where experimentalists and theorists can discuss the interpretation of top quark results and plan future measurements.


Matter to the Deepest

Contributions by TTK:
Michal Czakon: "Top physics at the LHC from the theory perspective"
Malgorzata Worek: "On the ratio of ttbb and ttjj cross sections at the CERN Large Hadron
Collider"

The program will be devoted to a review of the latest experimental and theoretical results on hadron collider physics, especially the results of the new LHC Run 2, and a discussions on the outlook for the coming years. The conference intends to provide a lively discussion between experimenters and theorists on topics such as the Standard Model Physics and Beyond, the Higgs Boson, Supersymmetry and Heavy Ion Physics and planning for the high luminosity upgrades during the plenary talks, parallel and poster sessions.

The European Physical Society Conference on High Energy Physics (EPS-HEP) is one of the major international conferences that reviews the field every second year since 1971 organized by the High Energy and Particle Physics Divison of the European Physical Society. The latest conferences in this series were held in Stockholm, Grenoble, Krakow, Manchester, Lisbon and Aachen.

The Conference will have parallel sessions (conveners) on the first three days and plenary sessions with invited talks giving a broad overview of the topics of the conference on the last three days (timetable). On 25 July there will be the special joint ECFA/EPS-HEPP session: Connection scales: bridging the infinites. Finally the conference will reserve plenty of space for poster contributions which can be visited throughout the conference. Dedicated poster sessions will be held to give participants the opportunity to chat with the authors.

The focus of the workshop will be on the interfaces between the physics of the visible and the invisible (neutrinos, dark matter and Beyond the Standard Model Physics) sectors.

The CERN Summer Student Programme offers undergraduate students of physics, computing and engineering a unique opportunity to join in the day-to-day work of research teams participating in experiments at CERN in Geneva, Switzerland. Summer Students attend a series of lectures specially prepared for them. Several scientists from around the world share their knowledge about a wide range of topics in the fields of theoretical and experimental particle physics and computing. Prof. Krämer has presented lectures on the phenomenology of the Standard Model. The slides and the video recordings of the lectures are available at: http://summer-timetable.web.cern.ch/summer-timetable/

Paricipation of TTK:
Prof. Krämer: Phenomenology of the Standard Model (1/3)

Participation of TTK:
Dr. Jan Heisig: A simplified model interpretation of searches for dark matter at the LHC and with the IceCube Neutrino Observatory
Mathieu Pellen: Exploring dark matter with AMS through electroweak corrections

This symposium combines the 12th International Symposium on Radiative Corrections (Radcor 2015) with LoopFest XIV (Radiative Corrections for the LHC and Future Colliders). This workshop provides a forum to coordinate activities focused on the theoretical challenges from current and future colliders. The focus will be on the potential for precision measurements, their role in searching for and disentangling physics beyond the Standard Model, progress in multi-loop and multi-leg calculations of Standard Model processes, new physics cross sections, new approaches and new theoretical developments. There will also be a few talks on more exotic theories and on the latest experimental progress.

This Workshop aims at bringing together theorists and experimentalists working on the phenomenology of the TeV colliders with an emphasis on the physics at the LHC . 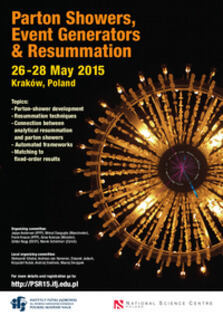 The workshop "Parton Showers, Event Generators and Resummation" provides a platform for exchanges between the analytic resummation and parton shower communities. It aims to intensify discussions on topics such as:

This year the workshop is organized in Cracow from 26-28 May by the Institute of Nuclear Physics Polish Academy of Sciences in Cracow (IFJ PAN).


Interdisciplinary workshop on "Models, simulations and data at the LHC"

The interdisciplinary workshop brings together particle physicists and philosophers of physics to discuss cutting-edge issues surrounding the nature of models, the use of simulations and the challenge of data arising from the Large Hadron Collider.

Each year, the German physical society invites the scientific community to participate in the annual spring meetings. More than 1000 physicists from experiment and theory in high-energy physics gather in Wuppertal. The scientific program consists of 1.159 contributions! Of course, the TTK contributes to the more than 1000 talks. Here is a list of the talks given by our PhD students:


Physics at the Terascale 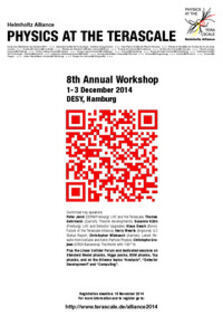 This week, the 8th annual Workshop of the Helmholtz Alliance "Physics at the Terascale" takes place in Hamburg. There will be many interesting physics presentations, but the formal end of the Alliance at the end of the year is also a good reason to look back what happened during the past 7 years.

Participation of TTK:
Jory Sonneveld: Role of Limits and Fits from Simplified Models
Dr. Stefan Berge: Using the Drell-Yan process to calibrate the CP measurement in H -> tau tau channel at the LHC 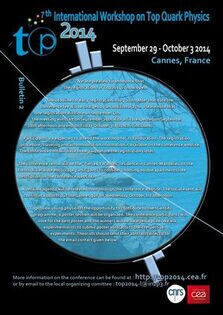 The TOP 2014 workshop will be held from September 29th to October 3rd, 2014 in Cannes, France. It will bring together about 130 experimental and theoretical physicists working on top quark physics and related topics. The workshop will provide a comprehensive overview of the latests results from the LHC and Tevatron experiments as well as the most recent theoretical developments and an outlook on top quark physics. The programme consists of plenary presentations, a poster session in particular for young researchers, and much room for discussions. The goal of the workshop is to foster communication on top quark physics on all levels, from analysis techniques to future strategies for the field.

In addition there will be a Topical workshop on top quark differential distributions:

The meeting will be held from 26-28 September 2014 in Cannes, France. The Workshop aims at maximising the scientific opportunity presented by:

It will bring together a group of experts in top physics and closely related subjects (parton distribution functions, parton showers, soft gluon resummation). The goal of the Workshop is to maximise the impact of the forthcoming fully differential NNLO results and help guide the need for further developments. Some questions that ideally will be addressed are:

The format of the meeting will be 2 days of selected plenary talks with plenty of time for discussions.

Each year, experts of cosmology and high-energy particle physics gather at the DESY Theory Workshop in Hamburg to exchange their latest ideas. The traditional Heinrich-Hertz Lecture will be held by A. Linde (Stanford). This year, the workshop is devoted to the interplay of cosmology and particle physics which has been recently inspired by the latest results of the sattelite experiment "Planck".