You Are Here: New Fellow at TTK: Christian Schwinn

We are happy to announce that Christian Schwinn has arrived at TTK as a new Fellow in Theoretical Physics. 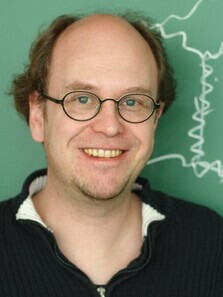 In October 2015 Christian Schwinn joined TTK as a Heisenberg fellow of the German Research Foundation (DFG).

Christian's research is focused on providing theoretical predictions for the search for physics beyond the Standard Model. He is following two different strategies: on the one hand the direct search for new particles at the LHC, for instance the production of supersymmetric particles.

The second strategy is the search for traces that new particles could leave on Standard Model observables through quantum fluctuations. To find such small deviations from the Standard Model, one also needs to know quantities like the masses of the W and Z bosons and the top quark very precisely. Therefore Christian is performing state-of-the-art calculations of the production cross sections of these particles.

One particularly interesting place where deviations from the Standard Model could show up is in the properties of the Higgs Boson, so Christian has recently begun to work on including such non-standard properties in predictions for Higgs production and decay.

Christian is a Lecturer (Privatdozent) in Physics and is looking forward to giving lectures at RWTH on Particle Physics, Quantum Field Theory and Relativity.